The patient’s tinnitus got worse after being treated at other hospitals due to the tinnitus that occurred so many years ago.

The patient went to the oriental medicine clinic, but it did not work, and tinnitus rehabilitation therapy and sound therapy didn’t work either.

It was more difficult on him/her in noisy places.

This patient’s tinnitus was judged to be due to right side high-frequency hearing loss. 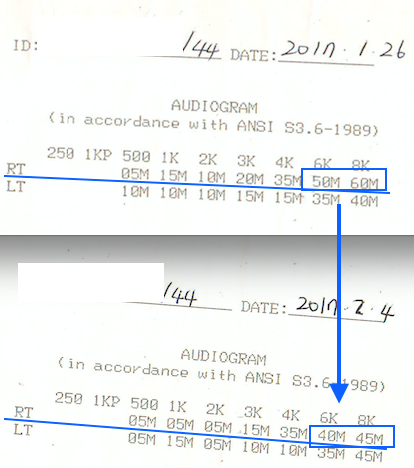 You can see that the numbers on the right 6K and 8K are reduced by 10,15 respectively.

(The smaller the number, the better hearing is.)

This is the hearing improvement in the high frequency range.

The tinnitus also got better the next day after treatment.

This patient came in due to tinnitus and hearing loss issues spanning 10 years. 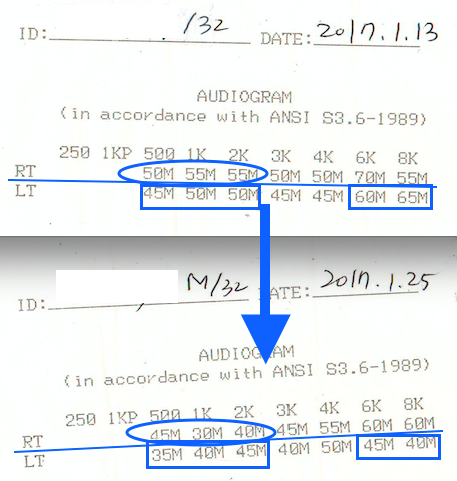 After treatment, both tinnitus and hearing loss improved significantly.

For each frequency, a change of 5 decibels is regarded as within tolerance range,

When reduced more than 10 decibels, it is considered as a meaningful change.

the result showed a remarkable improvement of about 10 ~ 25 decibels for each frequency. 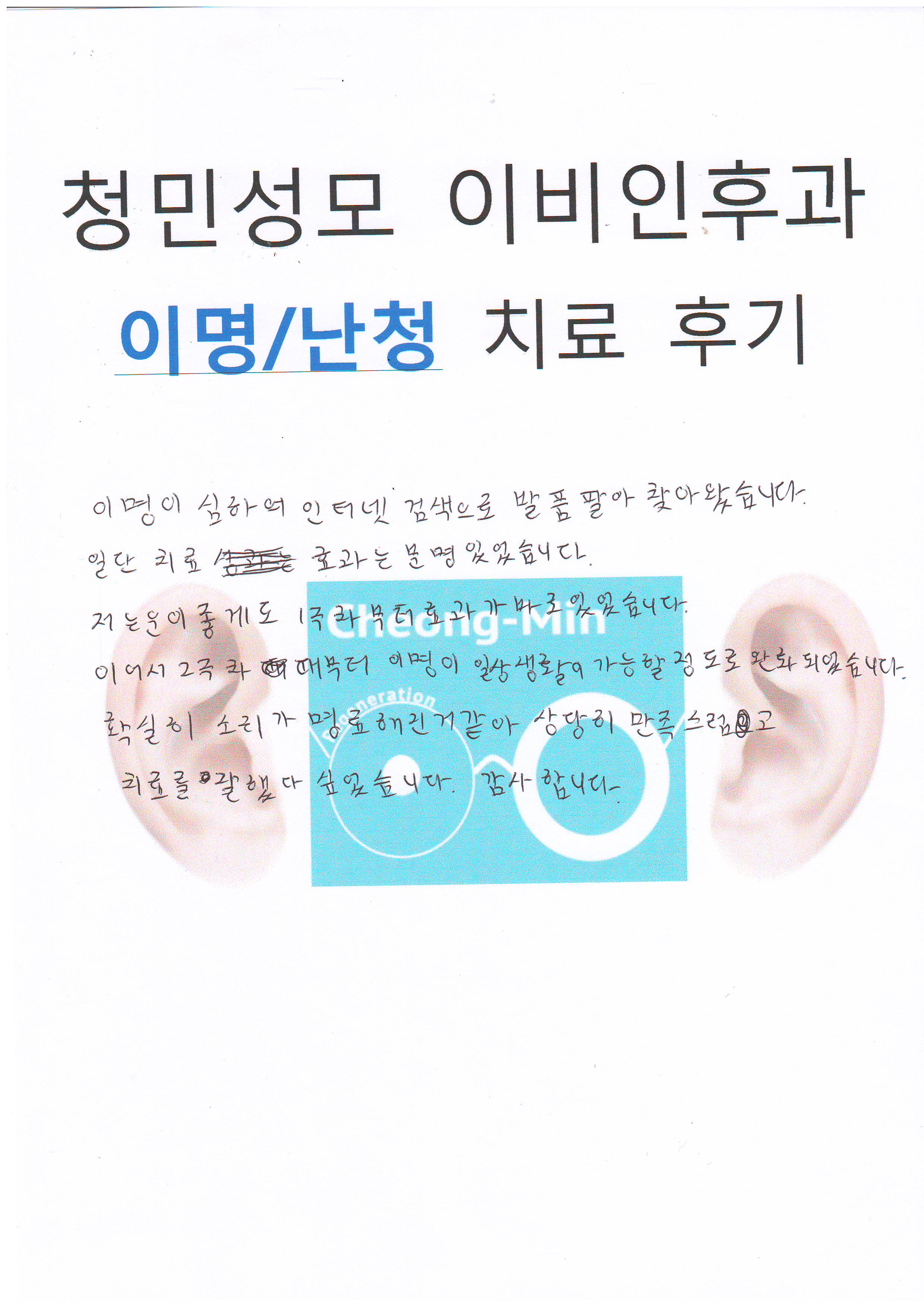 Had treatment from Cheong-Min Clinic.

I found this clinic online and came in for my severe tinnitus.

The treatment was effective for sure.

Fortunately, it was effective right from the first week.

From the second week of treatment, my tinnitus has been alleviated to the extent that I could go on with my daily life.

The sound is definitely clear so I am quite satisfied. I think it was good to get treatment.

This patient’s high frequency tinnitus occurred about 5 years ago.The left side tinnitus is worse.When the patient was sport shooting before, he/she didn’t use earplugs.

About 20 shots.The tinnitus occurred in the high frequency range of 6000~8000 hertz.He/she can’t hear other people well.After the test from Cheong-Min Clinic, there was hearing loss on both sides in all frequencies, and it was worse in the higher frequencies.This is the result of one time tinnitus and hearing loss treatment from Cheong-Min Clinic. 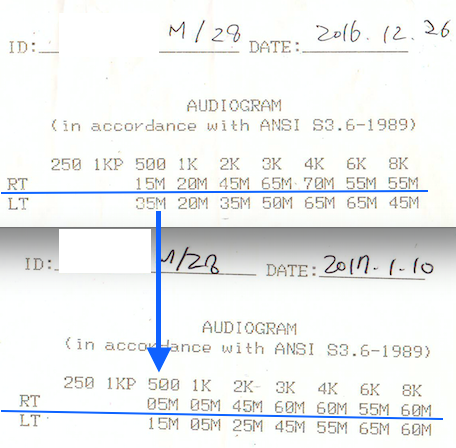 After one treatment, there is a threshold change for each frequency.

As seen in the above results, the threshold is decreasing at almost all frequencies on both sides (A difference of more than 10 decibels is considered significant).

This is the result after only one treatment.

The interesting thing is,the hearing threshold of 8000 hertz on the left side increased slightly, but the tinnitus on the left was still decreased.

This patient came in because of the hearing loss and tinnitus from stress.

He/she complained about a high frequency sound on the right side all of the time.

This patient had rhinitis as well.

The test showed hearing loss on the right from 6000 hertz.

High-frequency tinnitus was found to be caused by hearing loss in the high frequency range.

Treated one time in Cheong-Min Clinic. 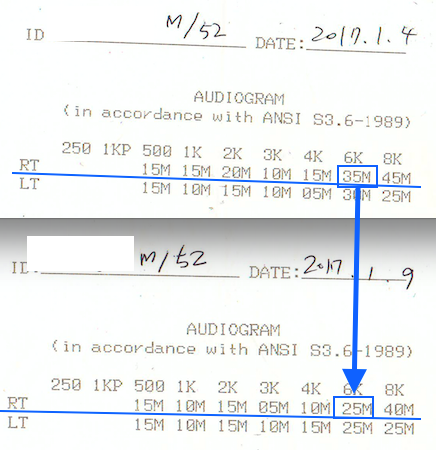 The other frequencies on the right side have improved by about 5 decibels, but that can be considered within the tolerance range. However, the high frequency range of 6,000 hertz (6K) has improved by 10 decibels, which is more than tolerance, implying clear improvement.

Several treatments are planned in the future.

The patient has developed hearing loss and tinnitus after gunfire in his service at army 10 years ago,

In a medical checkup a fow months ago, left hearing loss has been confirmed, with severe damage in high-frequency field from 1000hz with 55~75db loss.

Furthermore, someone has recently screamed at his ear ,
and then, the symptoms have gotten severe.

In this case, the auditory sensory cells in cochlea, including outer hair cell, are damaged due to transmission of excessive sound energy to ear from gunfire.

In human or mammals, natural recovery is unlikely.

The patient has received treatment once in Cheongmin St. Mary otorhinolaryngology.

Disparity of 5 db between before and after the treatment can be seen to be within error range.

However, improvement of 15 or more decibels is not within the error range, but is effect from the treatment.

The hearing loss in middle-to-high frequency field has been clearly improved .

The patient has reported that the consistent loud tinnitus has shown changes with becoming loud then quiet after initial treatment.

(the condition is also being improved.)

The patient will receive series of treatments repeatedly afterwards.

The patient has treated 4 times in our hospital.

Now, the patient has decreased TV volume, and

do not frequently ask people to speak again.

(During the treatment, hearing loss in high frequency may be aggravated temporarily.

The patient shows the same pattern and as treatment is continued, the hearing loss is shown to be improved at least 10 db in both sides than before the treatments.)

Speech discrimination score has improved in both sides.

Of course, the patient did not recover fully, which requires further series of treatments to be planned .

This is a male in his 50s. His hearing loss started a long time ago, and he complains about his severe tinnitus.

He can’t communicate in loud places and he can’t hear the TV.

He can’t understand it even if he turns up the volume.

The test showed severe both hearing loss in both ears.

This is the result after 2 treatments from Cheong-Min Sung-Mo Otolaryngology.

(The smaller the number, the better the hearing.) The right and left have slightly decreased numbers, which means that the hearing threshold has been reduced, and that his the hearing has improved as much. 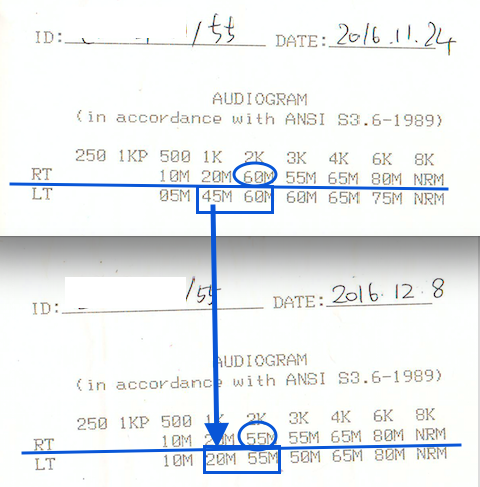 The speech discrimination score (the ability to discriminate words) has improved from 18 to 25. The patient said that he feels that he can hear louder as if there is a microphone in his ears. He also said his ears feel fresh. His hearing loss was advanced and severe so several treatments are planned.

Both of his ears have hearing impairment and it’s been decades.

He can’t talk in noisy places.

He had two treatments. And his speech discrimination score is improving slowly.

It is getting better from 8 points to 21 points and 24 points.

Because his hearing was not good before treatment, an additional treatment is planned.

His hearing loss has been getting worse for 10 years.

Some of his family members were also hearing impaired.

Family history is also important in predicting the prognosis of the disease.

improved from 36 points to 42 points.

One or two additional treatments are planned.