Finally, my method for treatment of the sensory-neuronal hearing losses and tinnitus is registered in the Patent and Trademark Office of Russia.

*Someone asked me after watching this video why I was running my office based in Russia.
My current clinic is definitely in South Korea.
You can check my current clinic in here: http://solsam.co.kr
I am not running my clinic in Russia yet, but I’m planning it.
That’s one of the reasons why I’d got a patent from Russia.

I am Minbo Shim who is running a clinic in South Korea, Seoul.

Recently I’ve read the numerous talks about my way of treatment on the Tinnitus Talk forum.

I am very interested in that you the Westerners have been excited by my treatment results.

The statistic data posted on my blog is definitely based on the results from the ‘real’ patients. 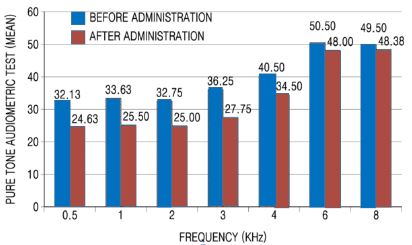 If I had tried to manipulate the statistic result, I would’ve made the result more dramatic.

But as you can see,  the statistic results are rather realistic than dramatic,

even though they are statistically significant.

And there are some individual differences about the final result, so  I do not guarantee any degrees of improvement.

That means some will experience a big difference and some will not.

Only I can say is  ‘ You probably will be the better hearing status after getting our treatment’.

Getting back the pt’s hearing to a ‘better’ status is a realistic and possible goal than making pt’s hearing a ‘perfect’ status.

Whenever the patient got better from hearing loss, the pt’s annoying tinnitus was gone as well.

You may also have interest in the total treatment period needed.

I usually do intratympanic injections every 2~3 days(twice or 3 times a week) for 2weeks, total 4~6 times.

My way of treatment is mainly based on the growth factors which have the potential to repair the damaged cochlea.

Any further questions, just send me an email: solsamclinic@gmail.com

If I don’t respond to your email, you can text me with skype: ID is ‘ cmclinics’.

* P.S. Here is the address of our homepage written in Korean, which I opened recently.
I’ve rebranded from Cheong-min to Solsam.
You can check more testimonials in here.

To see any testimonials on our Korean website, you have to register first,  then you can log-in with your email and password.

This patient suffered a sudden hearing loss.  She complained of ‘buzzing’ sound in the ears and had a serious rhinitis.

Hearing test showed that her right ear had a severe hearing loss.

She couldn’t hear on the phone and thus communicate well.

This problem should be taken care of as early as possible so we can expect higher recoverableness. This is the result of pure-tone audiometry result before and after the treatment.

We conducted a pure-tone audiometry: it let the patient hear sounds, from low to high, by frequency and let him  find the lowest audible sound. The numbers mean the volumes of sound, so a smaller number means a better hearing.

In general, the numbers below 40 mean audible sound and those below 20 indicate normal hearing with no difficulty communicating in daily life. 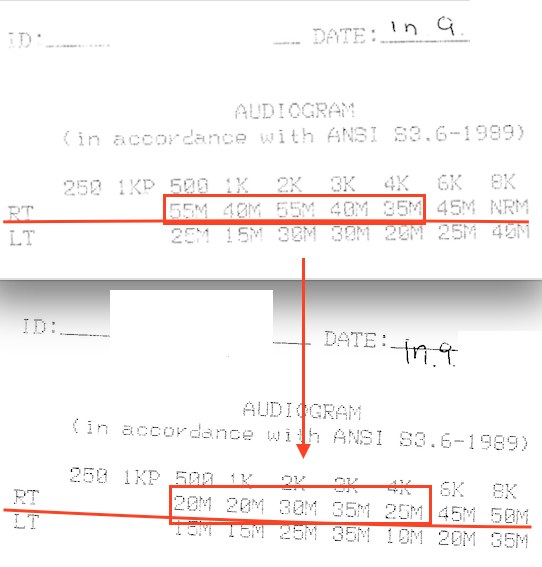 Before the treatment, the patient couldn’t communicate on her left ear on the line, but can now after the treatment.

This patient has hearing loss. In this case, both rhinitis and hearing loss should be treated together, so better result can be expected from the treatment than adults.

This is the result of pure-tone audiometry after a single treatment. 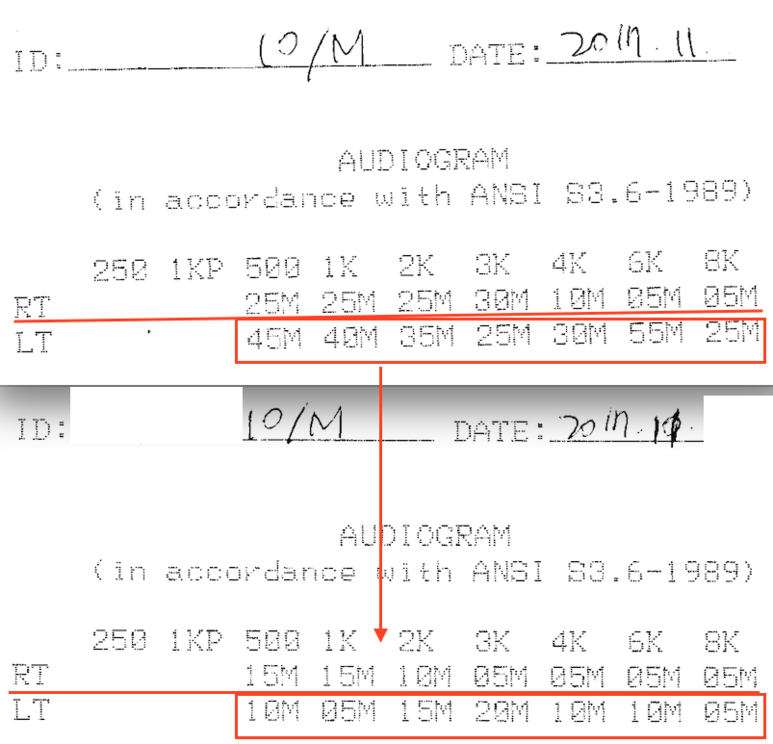 Pure-tone audiometry is a test that a patient hears a minimum audible sound. A smaller number means a better hearing.

This result shows a surprising number reduction (improvement) for all the frequencies on the hearing of the left ear.

The child says he can hear well now.

This patient came in due to an olfactory disturbance that occurred more than 10 years ago.

The palate sense was good and it was purely an olfactory disturbance.

He/she tried rhinitis surgery, but the sense of smell did not improve,

This patient gave up after being informed by the university hospital that it was an olfactory nerve problem and thus incurable, etc.

We have treated this olfactory disturbance three times. 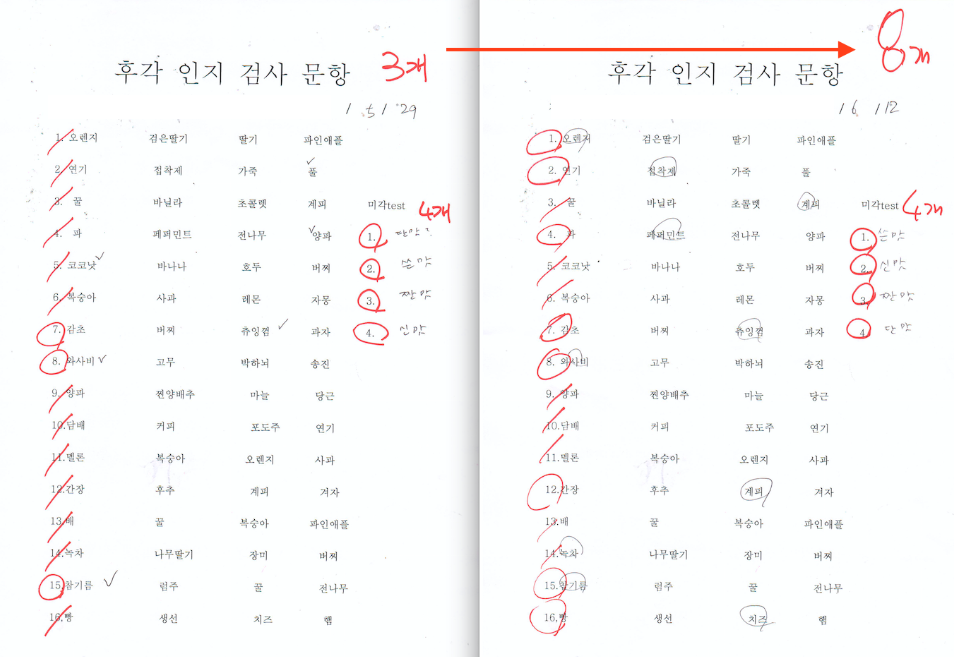 After three treatments, the olfactory sense improved to 8 points from 3 points.

It has already improved a lot, but we expect more improvement so the patient is on additional treatment.

If you have heard that treatment is not possible, do not give up, try our olfactory treatment.

Old olfactory disturbances can be treated!

Usually sudden hearing loss occurs when you wake up after sleeping.

The most common cause is stress, and circulatory disturbance is often assumed to be a cause.

The patient is in a situation where they can not hear after sleeping, so they are very surprised and worry about their life.

Especially, in cases where one ear was already impaired and the other ear has sudden hearing loss like the case below, the patient becomes even more surprised.

When puretone audiometry is performed, if it is measured at more than 40 decibels per frequency,

communication is impossible and there is almost no hearing. The bigger the number, the worse the hearing is.

If this number drops below 40, you will hear again

This patient started treatment in ​Cheong-Min Clinic right away and had 6 treatments. 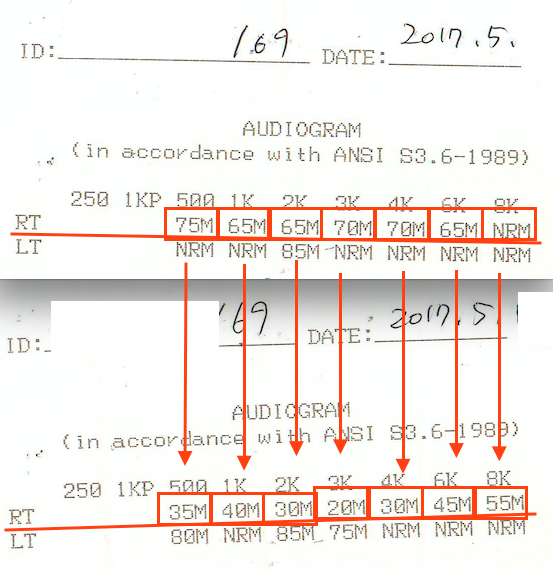 ( A decrease of 10 or more is a significant change beyond the tolerance range.)

Changes in each frequency,

Well, after this change, do you think he is still not able to hear? ^^*

The usual treatment for sudden hearing loss is taking a lot of steroids, which have many side effects and a low success rate.

In this way, 60% of patients do not improve even after being treated.

This patient came in Cheong-Min Clinic for sudden hearing loss that has lasted for 1 year.

At the time of the onset of the disease 1 year ago, he/she was admitted to a university hospital for steroids treatment but did not have any improvement.

He/she was treated only once at Cheong-Min Clinic. 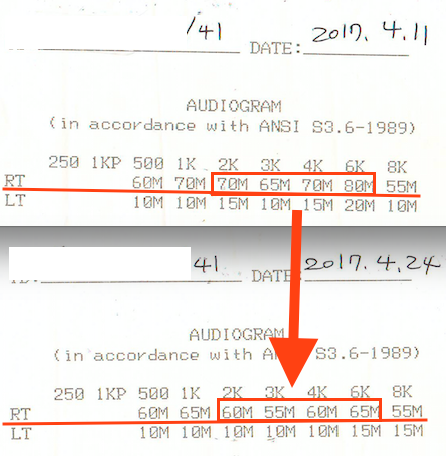 (The smaller the number, the better the ears hear.)

The speech discrimination score was checked as well.

(The larger the number, the better the ears hear. A change of 6 or more is considered a meaningful change.)

The patient came in for hearing loss and various sounds in the ear.

He/She said it occurred due to stress.

Rhinitis and deviated nasal septum were also treated together.

This is the result after hearing treatment at our clinic. 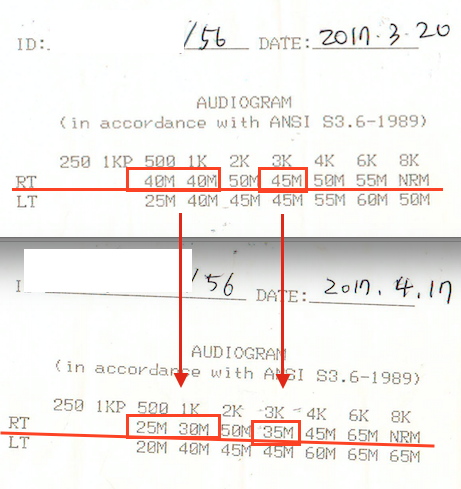 On the right side, you can see that the right low frequency and medium frequency, which are involved in daily conversation, have improved by 10~15 decibels or more.

(The smaller the number, the better the ears hear.) 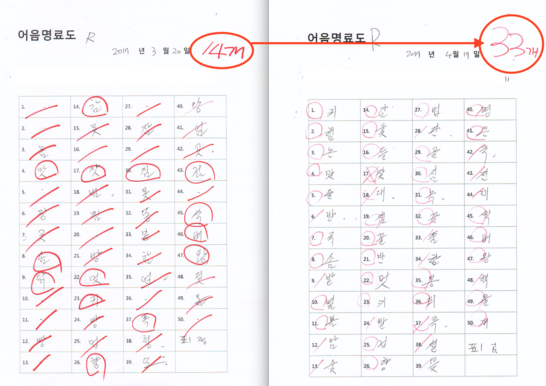 The speech discrimination score also improved significantly from 14 to 33 points.

We are still in the process of treatment for this patient and expect to see more improvement with additional treatments.

The patient came in 3 years ago due to sudden hearing loss after sleeping.

The patient said he/she currently uses a hearing aid on the left side, but he/she can not hear even with a hearing aid.

He/she had some dizziness.

He/She have had an eardrum injection at another hospital.

Rhinitis has also been confirmed.

(It is a test to measure the volume at which sound can first be heard.

The smaller the number, the better hearing of that frequency.) 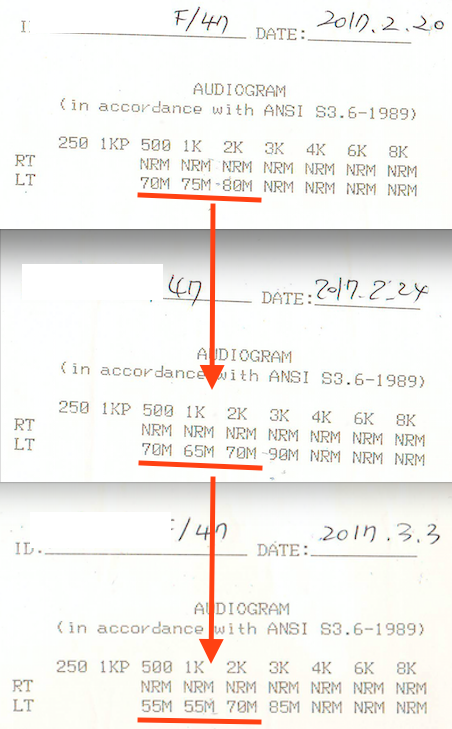 On the left side by frequency,

A change of 5 decibels and above is regarded as a meaningful improvement beyond tolerance range!

The above patient showed significant improvement in only 2 treatments.

The speech discrimination score was checked as well.

(It is to check if the patient can discriminate the meaning of the word after listening to the loudest sound he/she can hear comfortably.

The higher the number, the better the hearing.)

Increased from 0–>2–>6The patient, who did not know the meaning at all, began to understand the meaning of the word, which means that a person who was able to understand only by looking and reading lips can now make conversation after the treatment.

We planned to do one or two more treatments and stop, then additional treatment.

*Sometimes, many people ask if this is true but all of the cases here are improved hearing cases and there is no fabrication or misrepresentation at all.

The patient came in for hearing impairment which occurred 3 year ago when he/she woke up.

Currently, he/she is using a hearing aid on the left side, but he/she can not hear.

There was some dizziness.

He/she had an eardrum injection at another hospital.

Rhinitis has also been confirmed.

A puretone audiometry test was done.

(A test to find the volume of the first sound heard.

The smaller the number, the better the ears hear.) 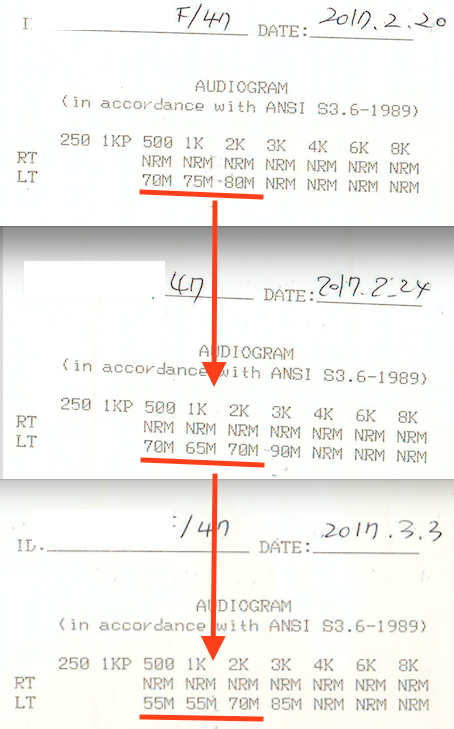 Left side, by frequency,

A change of more than 5 decibels is a significant improvement out of the tolerance range!

This patient significantly improved in only two treatments.

The patient said he/she you can hear better than before!!

After the treatment, sounds were so loud that he/she reduced the volume of the hearing aid.

The speech discrimination score was checked.

(The larger the number, the better the hearing.)

It increased from 0–>2–>6The patient, who couldn’t understand at all, began to understand the meaning of the words.

In other words, a person who was able to understand only by looking by reading lips can now make conversation after the treatment.

We planned to do one or two more treatments and stop, then additional treatment.

*Sometimes, many people ask if this is true but all of the cases here are improved hearing cases and there is no fabrication or misrepresentation at all.